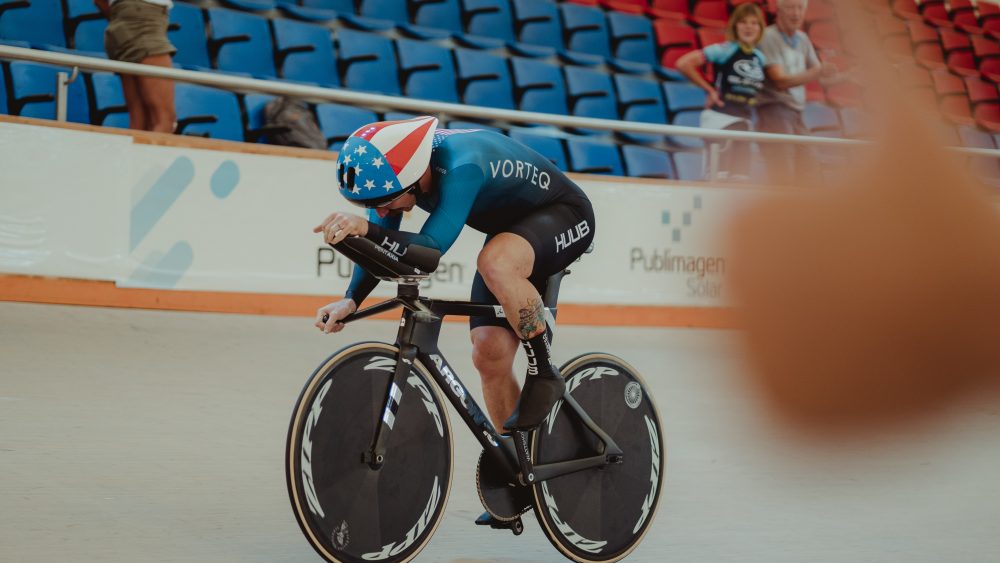 In our previous article we detailed the role we played in helping Ashton Lambie become the first person to ride a 4km Individual Pursuit (IP) in under four minutes. For this piece, we will be deep-diving into the record-breaking technology that helped Ashton make his mark on history.

It’s commonly known that different skinsuits perform differently on different people. What is less common knowledge is why this is the case.

The day before the record attempt, Ashton clocked a 4:02.4 across the line using an older specification Vorteq suit. In this post, we’ll look at how a seemingly small change in a skinsuit contributed to record-breaking margin of 2.5 seconds overnight.

Background: Importance of the Reynolds Number

The Reynolds Number is determined by three things:

The graph below shows how the drag coefficient (CD) of different materials wrapped around a 100mm cylinder changes with speed. You can see that as the speed (and therefore Reynolds Number) increases, each of the three different fabric specifications cause the flow to transition from laminar to turbulent at different stages (known as boundary layer transition).

Understanding the Re values for a particular event helps us to determine what technology to put in the skinsuit. For Ashton, the size of the object (his body geometry) and speed (target record pace) were fixed, but the density would change for an attempt at altitude, so we had to come up with a different solution for the Sub-4 skinsuit.

We had already made a suit for Ashton for the 2020 Track Cycling World Championships in Berlin, where he rode the third fastest IP time ever recorded at 4:03.640. Whilst we knew that he was already using the fastest skinsuit possible at that event, we also knew that it would be totally unsuitable for an IP attempt at altitude.

From our extensive and detailed R&D programme we know what fabrics and technologies work best at what Reynolds Number. On the day before the eventual record-breaking attempt, Ashton rode his original suit from the Berlin World Championships to a 4:02.4.

The graph below shows the results from some of the research we have conducted on fabric technologies and the justification for making Ashton a new suit. It shows how the Drag Coefficient (CD) changes with Reynolds Number and was created using information gathered from the 3D scan we took of Ashton to help make his suit, data on the air density in Aguascalientes and Berlin and the speed required to ride an IP in less than four minutes. This makes this particular graph unique to Ashton, but it’s the same process we use for all athletes to make their own Vorteq skinsuit.

A lower CD means an object of the same size/frontal area (A) will produce less drag and travel faster for the same power. Also shown are markers of the Reynolds Number Ashton would need to ride at to break the four-minute barrier at sea level and at altitude.

You can see that the Tokyo 2020 Suit specification produces the least amount of drag at 61.7kmph at sea level and continues to get even better as the Reynolds Number increases, showing why this technology was so successful at the recent Olympics. However, you can see that when riding at 61.7kmph at altitude, our Sub4 Record specification produces significantly higher drag than the Tokyo 2020 Suit.

This is why we chose to make a new suit using the Sub4 Record specification for the record attempt and is partly why Ashton rode to a 4:02.4 in his old suit and a 3:59.9 in his new suit.

“When you’re fighting for 7-10 watts, every little bit of kit adds up to a lot! My partner, Christina Birch, actually brought the new Argon bike on the Sunday night before the attempt, so I only had Monday and Tuesday to ride it before the attempt.

“I mostly wanted to see how the bike felt in as close to race situation as possible, including the suit! Having some race pace efforts to get everything as dialed as possible is so important. The suit is such a huge impact on the feeling and sensations of the bike, especially at 65kph!“

To make something as ambitious as Project 3:59 happen, everyone involved has to be committed and focused. This includes the developers of all the equipment used, from the skinsuit to the wheels; the personnel assembling the bike at the track; the coaches and performance staff; and let’s not forget Ashton himself putting in the hours of hard training with the support and encouragement from his family and friends.

“The suit is one of the wildest skinsuits I’ve ever worn. Since it’s based on a 3D scan of my entire body in this exact position, it’s perfectly cut for no wrinkles and to have the perfect tension on the fabric for maximum aero advantage!“